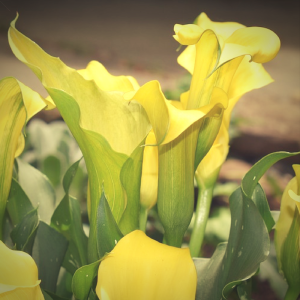 All the Calla Lilies originate from the African continent and are found wild between north Malawi and South Africa. They are often referred to as Arum Lilies. The Calla Lilies should not be confused with the flowers found in the genus named Calla that can be found in the Araceae family. This genus contains only one species, the Calla palustris, and unlike the Calla Lilies, this plant is native to cool regions in the temperate zoon and grows wild in Europe, North America and northern Asia. Another source of confusion regarding the Calla Lilies is that they actually do not belong to the family of the lilies.

The Calla Lilies are all rhizomatous plants that can reach a height of 1-2.5 meters. The leaves will grow up to 45 centimetres.

The name Calla is derived from the Greek language and means ‘beautiful’ and this is a very appropriate name since the Calla Lilies are appreciated world wide for their exquisite beauty. In regions too cold for these flowers, they are cultivated indoors in homes and greenhouses. When you plant your Calla Lily, it is important that the soil is free from salt since Calla Lilies are very sensitive to salt. As long as you provide your Calla Lily with appropriate soil, plenty of water and lot of sunlight it is actually a though and durable plant that grows fast. Use a nutritious soil that drains easily. Place your Calla Lily in direct sunlight or light shade. Calla Lilies will do best when the temperatures are kept over 70 degrees F. 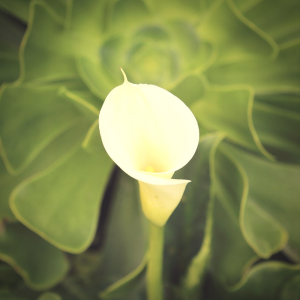 Outdoor living Calla Lillies will usually require no fertilization as long as it has been planted in rich soil. Indoor Calla Lilies, or outdoor Calla Lilies that are planted in pots, should be given liquid plant food regularly. You can either mix a very weak plant food solution and use every time you water your Calla Lily, or mix a little stronger – but still quite mild – solution and feed your plant every three weeks.

When the blossoming period is over, you should allow the foliage of the plant to mature. Remove the flowers as they start to fade and wither. Slowly decrease the amount of water until the leaves have turned black. The tubers need at least 3 months to rest before they can bloom again. Since the Calla Lily grows fast it will eventually require repotting, and this is the ideal time to do so.

The Different Roses You Can Grow In Your Rose Garden