The USDA Plant Hardiness Zone Map is the standard by which gardeners and growers can determine which plants are most likely to thrive at a location. The map is based on the average annual minimum winter temperature, divided into 10-degree F zones.

You can use the zones as generically or specifically as you’d like.

The hardiness zones are informative: the extremes of winter cold are a major determinant of whether a plant species can be cultivated outdoors at a particular location; however, the USDA hardiness zones have a number of drawbacks if used without supplementary information. The zones do not incorporate summer heat levels into the zone determination; thus sites which may have the same mean winter minima, but markedly different summer temperatures, will be accorded the same hardiness zone. -Wikipedia

Because it is based on coldest annual temperatures, US zones begin at the very northern part of Alaska as 1, moving into higher digits the further south you go. The division lines aren’t straight, thanks to varied weather patterns due to wind currents, terrain, and other factors that affect the weather. 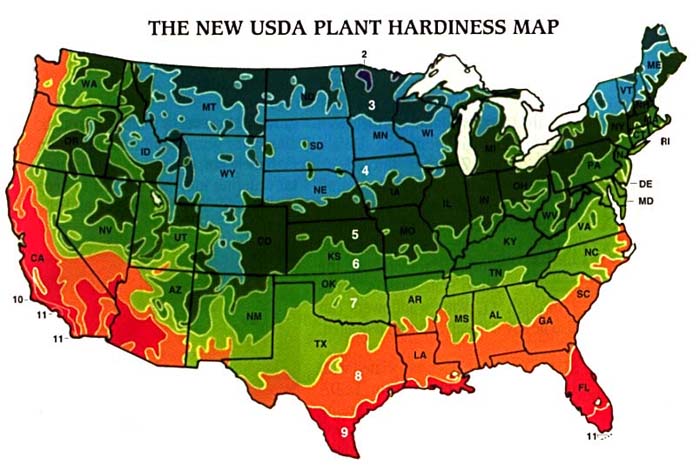 The latest version of the USDA Zone Map was jointly developed by USDA’s Agricultural Research Service (ARS) and Oregon State University’s (OSU) PRISM Climate Group, and released in January of 2012. To help develop the new map, USDA and OSU requested that horticultural and climatic experts review the zones in their geographic area, and trial versions of the new map were revised based on their expert input.

Compared to the 1990 version, zone boundaries in the 2012 edition of the map have shifted in many areas. The new map is generally one 5°F half-zone warmer than the previous map throughout much of the United States. This is mostly a result of using temperature data from a longer and more recent time period; the new map uses data measured at weather stations during the 30-year period 1976-2005. In contrast, the 1990 map was based on temperature data from only a 13-year period of 1974-1986.

However, some of the changes in the zones are a result of new, more sophisticated methods for mapping zones between weather stations. These include algorithms that considered for the first time such factors as changes in elevation, nearness to large bodies of water, and position on the terrain, such as valley bottoms and ridge tops. Also, the new map used temperature data from many more stations than did the 1990 map. These advances greatly improved the accuracy and detail of the map, especially in mountainous regions of the western United States. In some cases, they resulted in changes to cooler, rather than warmer, zones. 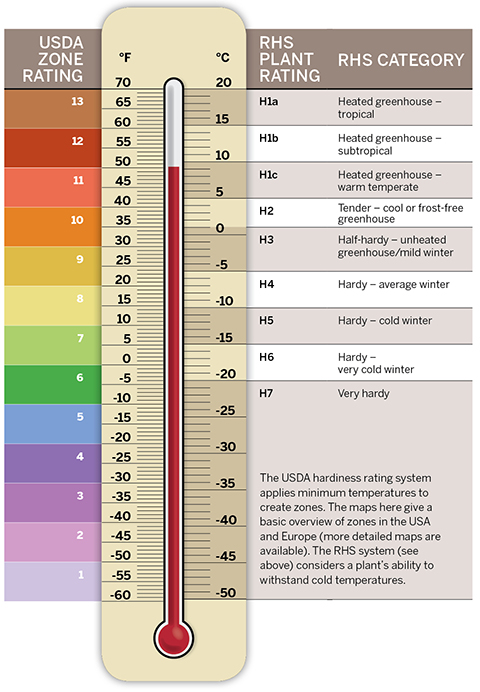 Here are some major environmental features that can shape and exploit microclimates. Once you begin to recognize and look for microclimates, you start understanding what makes a successful landscape.

1. Altitude influences temperature. In general, for every 250 feet rise above sea level the temperature drops one degree. This shortens the growing season by several days in mountainous or hilly locations. Traveling north along the east coast of North America, growing seasons decrease by weeks. Edwin Way Teale’s 1951 account “North with Spring” superbly chronicles these changes in the natural world.

3. Bodies of water, whether large or small, function as heat sinks. Small ones absorb daily heat and imperceptibly return it to their surroundings. Large bodies such as rivers, lakes and oceans absorb heat over long periods and successfully moderate regional climates.

North American environments along the Great Lakes have growing seasons averaging five to ten degrees warmer than areas away from the water. The Gulf Stream, originating in North America, warms coasts of Ireland, Cornwall, Wales, Brittany and Normandy allowing semi-tropical plants to thrive in these locations.

5. Soils influence not only what grows where, but also how plants develop and thrive. Underlying rock and weathering dictate soil types and pH. However, inconsistencies do occur. Pockets of acid-loving Rhododendron grow in some acid pockets of lime-rich England; populations of lime-loving ferns and wildflowers grow in limey patches of acid New England soil. Gardeners modify soil by applying lime to neutralize or ammonium sulfate to acidify the soil.

6. Microclimate changes by the presence of buildings and other structures influences more than plant survival. They factor into longer growing seasons so plants reach their peaks earlier and carry on longer than indigenous growing seasons allow.