Rhubarb is commonly eaten as though it is a fruit, although in fact it is a perennial vegetable. It is simple to grow, produces a good crop, and if tended with care, can last for up to twenty years. It prefers either full sunlight, or partially shaded areas. 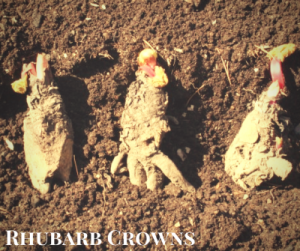 Rhubarb can be planted out in sets/crowns anytime between November and early April, and can survive temperatures as low as minus fifteen degrees centigrade, as it is virtually frost resistant. The sets are usually around 10cm in diameter.

Before planting, ensure that you have a clear, well-weeded, open patch of well-drained soil, and that the soil is well fertilized. Dig down between two and three ft deep, place the set into the hole, cover with soil, gently firm out the surrounding soil, and ensure that the rhubarb is watered well. If you are planting more than one plant, you must space them approximately 4 ft apart.

Rhubarb can be grown without being forced, but will yield a better crop, which is more tender and is ready for picking earlier, if it is forced. Being ‘forced’ means that once the set has been planted in fertilized soil, it is covered with a large pot or container to encourage it to grow quicker. The pot keeps the set in complete darkness, and encourages growth. The pot/container can be removed after about two weeks.

Rhubarb can be grown directly from seed, but this does not always guarantee good results. To grow from seed, plant the seeds from March to April outdoors approximately 3cm deep and 30cm apart. In Autumn, or the following Spring, select the strongest plants and place in their permanent positions in well-drained, fertilized soil 15-20cm apart.

Care and Attention for Rhubarb 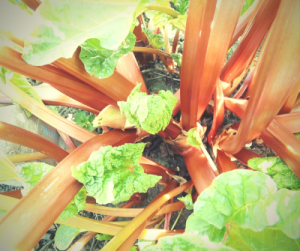 Any flowering stems of rhubarb should be removed and disposed of.

The green/pink stems can grow up to 2 ft long, and should be ready for picking in Spring to Summer. When picked, the stems can be cooked and can be used in many dessert recipes.

To pick rhubarb, hold each stem at the base, twist the stem, and pull firmly upwards. Do not eat the rhubarb leaves – they are poisonous; instead recycle or compost them. Only eat the stems of the rhubarb.

To keep the plants in good condition, they need to be divided every 5 – 6 years (ideally during the Winter months) when dormant. To do this, dig the set out of the soil, firmly separate into 2 – 3 sections with a sharp spade, ensuring that each section has at least one shoot/bud. Then plant each individual section separately, making sure that the roots are still pointing downwards, and the top of the shoots are at least 4cm under the surface of the soil.

How to Grow a Butterfly Garden