Pruning is not difficult. It stimulates growth, the plant gets older and remains longer in bloom. Always use good pruning tools and keep you on the cutting rules.

Pruning is the removal or shortening of entire branches and twigs. Clipping is the removal of projections of a plant to get that in some form or maintain. Hedges and boxwood figures are not pruned, but clipped. Get your taking a whole branch road, you are pruning. It is also prune the tops of plants.

The main reasons for pruning are:

Annuals complete their life cycle in one growing season, other plant groups take longer. Some trees will take ten or more years before they will flower. In the juvenile stage, the shoots and leaves are formed and the plant is growing rapidly. In the adult stage they flower and set seed. In old age reduces growth and flowering phase, followed by the death phase. Through various interventions, including pruning your extension phases. Prune your plant properly, the plant gets older and he stays longer in bloom.

Pruning stimulates new growth. Prune your overweight branches, the new growth is greater than if you prune lightly. Keep that in mind. Prune heavily on the side where the plant is less developed, this can lead to increased growth in those areas. Prune lightly to the most developed part. Regular pruning creates a balanced outcome goal. Influences of wind or sunlight is sometimes difficult to account for. 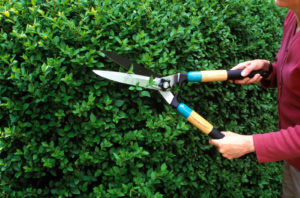 Observe the following safety precautions when you prune:

Know what PPE to wear when pruning

Stick to the following pruning rules for a good result:

How do you prune a hydrangea so that it loves size and continues to thrive? Prune all the old inflorescences out to 15 centimetres below the flowers. Prune after all thin, wispy twigs away. Reduce the entire shrub. Prune in spring 20 percent of all large, old branches at the base path. Leave the rest. Prune 20 percent the following year again. Thus, the plant forms each year below new branches. Rejuvenate with the 20 percent rule is called. So you plant flowers beautiful and you keep it within bounds.

When should you be pruning?

When you prune is dependent on the purpose and pruning the crop. We would like to give you some general tips:

Learn more about Summer Pruning in our Guide.

There are several groups with special pruning pruning rules. We have put the most important for you in a nutshell.

Cleaning perennials in spring or fall. Short stems to half if they are not pretty.

Bamboo has no special pruning time. Get rampant root suckers off and connect the roots then in special bamboo foil.

Pruning climbing roses limited in autumn after flowering. Only Get sick and dead branches. Prune bush roses, stem roses and everything in it seems like the chances of freezing has passed but they already sprouting between March 1st and April 1st.

Top lavender in the spring. Cut out the old, woody area.

Prune container plants if you put them in winter storage, they take up less space.

Each species has its own pruning. A good pruning book is an excellent guide. Pruning grapes and kiwi by January because in February the sap already strongly under way.

Perennials in the fall whether or not to prune?

In nature perennials die down in the autumn, and life by the roots. The dead remains ensuring above ground for winter protection. Clean the dying plants in autumn, when they stand next evergreens. So that are not covered with the remains and prevents them from rotting. Lay mulch around the cut plants as winter protection.

Shrubs that bloom in winter and spring

Shrubs that bloom in summer and autumn

Prune the day of flowering immediately after March 1st. Prune what is grown there, some light pruning you can get done very briefly.

The same rules apply as for deciduous shrubs. Always remove dead along each abrasive and diseased branches and suckers. A rhododendron blossoms from buds formed in the previous year. Prune these so carefully or not at all, or get off the faded flowers.

Most hedges and conifers you cut once a year, preferably around the longest day (June 21). Cut fast-growing hedges such as privet and barberry five times a year to keep them tight. No earlier than May and no later than August.

The more the better applies to pruning boxwood. Four times a year, pruning is not a problem. Cut fast growing species at least once a year, so the plant gets a good density. Please note that boxwood needs more water after pruning to recover.

Bleeders are very strong in spring with sap such as walnut, maple, pine and birch. This is why you should prune at the end of the summer when they are less likely to cause bleeding and the pruning wounds close easily.

Weeping willow trees have drooping branches that grow on the ground. That is not the intention. Shortly they therefore just above the ground.

Prune fruit trees in the winter to keep an open crown. Get in summer suckers road coming from the roots and rootstock. Search root sprouts in the ground until their adhesion and tear them loose there. Tear shoots too loose, do not cut off the rootstock to prevent new ones. Prune suckers in the crown away immediately. Water Raffle tickets are rapidly growing shoots which, unlike the usual branches grow straight up. Pruning in winter model in the crown. Do this so that the fruit develop good gates and there is no tangled branches growth. Consult a good pruning book for more information.

A municipality can refuse felling a tree if: