Gardeners, looking for a challenging plant, will find it among some orchids tough enough for outdoors. Able to thrive in environments where cold winters are the norm, gardeners who grow indoor orchids will easily recognize the beloved flower forms. Gardeners can turn to Bletilla, Calanthe, Cypripedium or Spiranthes for inspiration, both in species plants and hybrid cultivars. 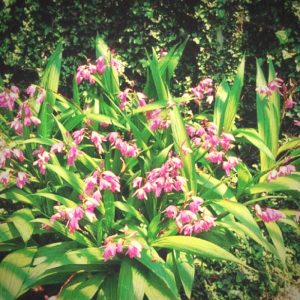 Hardy orchids are not for the faint-of-heart gardener but those who love plants have found success growing them as natives among a wildflower planting, in a shaded garden or as a cherished, and protected, specimen plant. Gardeners will want a well thought-out site, taking into account the expense, when choosing where to plant these woodland perennials.

Bletilla striata, called the Chinese ground orchid, is hardy in zones 5 – 9. As its name implies, Bletialla is a native of China and Japan. Issuing up from the center of the plant, the long leafless stems are lined with quintessential orchid blooms flourishing in spring. The foliage in mass, which reaches approximately 12” – 24” tall and wide, looks like swords of grass but more papery than the leaves of bearded iris, for instance.

Although Bletilla striata may tolerate a full sun location in a northern garden, a partly shaded planting bed is best for plants to thrive long term. The soil should be well amended with organic matter if a humus texture is missing. Mulch is wise to use for protection against drought conditions in summer and freezing temperatures in winter.

Bletilla striata grows from pseudobulbs. Like other hardy orchids, more plants can be had by digging up and dividing the plants or, in this case, dividing the bulbs. Overwintering and growing the bulbs indoors as a houseplant is another way of saving these orchids until the next spring.

Calanthe is another hardy orchid genus from which to choose. Calanthe discolor and Calanthe sieboldii, a hardy yellow orchid, is limited to zones 7 – 9. Gardeners who wish to push the boundaries of hardiness will consider late spring frosts their enemy; something to guard against.

Calanthe orchids have very vertical racemes, up to 15” tall, on a plant whose leaves are more oblong than narrow. This hardy orchid likes shade in a wooded environment and makes good companion plantings for blue hosta and Solomon’s seal perennials.

Cypripedium, called lady’s slipper, is an orchid with a hardiness range of 2 – 7. Cypripedium has species native to southern areas of eastern North America, making it ideal for woodland wildflower gardens. This orchid plant benefits from leaf mold mulch under a canopy of trees and prefers acidic soils.

The Cypripedium plant grows up to 24” tall with leaves that have an accordion appearance resulting from the vertical veining. Each spring flower is made up of three petals and an exaggerated lip called the pouch, also an iconic feature of many orchid species.

Spiranthes cernua is a fall blooming hardy orchid, which is more reliable for northern gardeners. The native orchid ranges from Canada to the southeastern United States, from zones 4 – 8. The common name is ladies tresses and has a fragrant flower. 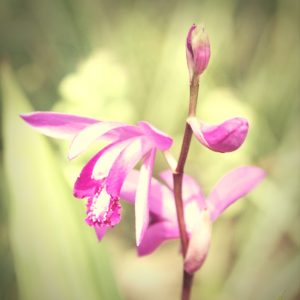 Protecting the hardy orchid should be part of a maintenance care plan, first consider the site of the planting bed. Culprits that threaten orchids outside can come in the form of two-legged Homo-sapiens or four-legged mammals, as well as insects who want to feast on the succulent plant.

Hardy orchids can be sited as a specimen plant in a private garden to keep it safe from theft or as a collection surrounded by less favored plants to deter wildlife. Slugs like orchids outside, as well as hostas, so use strategies to dissuade slugs from chewing up the foliage.

Although there is an increase in hybridizing orchids, the cost of a hardy orchid is still prohibitive for many. Plant lovers know it is no less dangerous for wild orchids threatened in the native plant world so gardeners must recognize they are the orchids’ first line of defense, by not creating a market for species harvested from the wild.

Gardeners can successfully grow orchids outdoors as long as the correct habitat is provided. Whether a species or hybrid plant, the hardy orchid makes an excellent singular choice for the north side of a building or several planted among like-minded shade-loving plants.

Tiarella, Heuchera and Lilium Martagon perennials and woodland ferns are more plants that, combined with hardy orchids, will grow to make an interesting landscape.

Power Tools Everyone should own

Make a Tin Mini Chalk Board